Continuing to explore new avenues Vince is developing new projects for stage, film, and television.  CHECK OUT OUT WHAT’S IN DEVELOPMENT

A comedy that follows four women, once college roommates who decide to once again share a home “What Women Say to Women When Men Aren’t Around”. 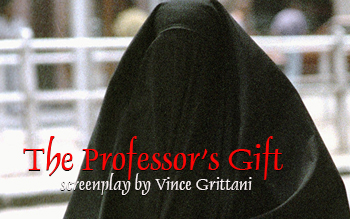 At the height of the swinging 60’s in London, a young university professor is surprised when a woman in a burqa appears at his door, a gift from the father of an Arabian prince he tutored.  “The Professor’s Gift”

“Nightmare Over Nelson Falls”   When

a town is threatened by a series of fatal dog attacks it is discovered to be an act of vengeance for a murder committed twenty-five years ago.

“Ninety-Nine Christmases” A teenager poet in need of a melody in order to win a local Christmas song contest is assisted by Santa’s lost musical son, Noël, the first.

For over 35 years Vince Grittani has been creating projects from concept through to final production. “CreActivity” is  his own term for this process.